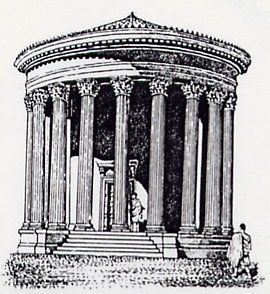 Caesar’s Girlfriend Got him Killed…

It’s rather ironic that the place where Julius Caesar met his end is now a cat sanctuary tucked away into a nondescript corner of the city. All around the ruins of temples and overgrown weeds, trams and cars whizz past oblivious to the fact that steps away the fate of the western world was decided on the floor of a theater. Talk about high drama! Now, only cats bear witness to the significance of the location. When Caesar was alive, he was plagued by one of them in human form – the temptress Cleopatra of Egypt. It’s always the pussy…cat that brings a man to his end. It’s no better than he could expect given his crimes of the heart. If Julius Caesar had not met one particularly spiteful woman, he might not have met his end and history would be forever changed. The thing most people don’t know is that Caesar was not done in by plotting senators but by a woman he scorned…at least that’s what obvious to me. And the history backs me up. The question is who was the woman and why did she do it?

For those history buffs familiar with Caesar, the facts speak for themselves. For those who don’t know the details, it makes for an interesting tale. The nitty gritty is that Caesar connived, warred and bribed himself into position to become King, though he pretended otherwise.  Nobody bought what he was selling – his rivals claimed him ambitious – ruthless even, and they weren’t wrong about him.  Caesar WAS ambitious and he didn’t care about killing and enslaving an entire population if it gained him a crown.  The Roman Senate came to fear him worse than death. The rich have never taken kindly to having their wealth snatched away them, so naturally they plotted to kill the bastard who dared to raise that kind of ruckus in the city. What they lacked was a man with a name esteemed enough for the others to hide behind. Caesar was too popular a man to simply attack and throw into the Tiber as the Gracchi brothers, Tiberius and Gaius were dispatched to the afterlife.

The senators could not have selected a better turncoat than Marcus Junius Brutus. His mother was Caesar’s undoing and he was the chief weapon Caesar’s enemies used against him. His mother Servila Caepionis was the love of Caesar’s life by all accounts. Their affair lasted twenty years, through his marriages to two other woman and his extended military campaigns. Think of Prince Charles and Camilla on steroids and you have Caesar and Servila.  Her love affair with Caesar was pretty accurately described in HBO’s Rome series, some historians have even entertained claims that Caesar was the father of her son Brutus. Considering Brutus was one of the murderers who butchered Caesar on the floor of Pompey the Great’s theater that is highly suspect. It makes the story juicier, but it’s probably not true because that would have made Brutus guilty of a parricide – murder of his father – the most deadly sin of the Roman world. Nothing was worse than that – it was an act that guaranteed you a most gruesome death. Violators of this sacred taboo would be lashed bloody, tied into a sack with a viper, a chicken, a monkey and a dog and thrown into the River Tiber. Committing an act so heinous as to warrant that punishment would be far beneath the dignity of a noble man like Brutus and unlikely given his family connections which reached back to the founding of the republic.

The meat of the story comes in with the temptress Cleopatra. Caesar visited Egypt and fell in love with the young queen who was fighting her brother for power at the time. Their meeting was the stuff of legends. Cleopatra had herself smuggled in to see him rolled in a rug that was unfurled to reveal the eighteen-year-old queen. Caesar was mesmerized and they began an affair that put Egypt in her hands and Caesar’s child in her belly. The child, a boy, should have been Caesar’s heir and master of Rome and Egypt but fate again intervened.

All of this was well and good until 46 BC when Caesar had the nerve to bring his foreign queen to Rome and install her in a villa as his mistress. Caesar was quite public about their affair, visiting her openly.  The insult, of being usurped as mistress to the great man, was evidently too much for Servila to bear.  Embittered, no doubt she suddenly recalled her firm republican principles and involved her and her son in the plot against Caesar. She was one of the few women privy to the plot and present with the conspirators immediately after the deed; in fact they met at her house.

There are facts to back up the premise here. There are many scholars who put Cleopatra in Rome at that time with her son. After Caesar had been murdered, she left immediately to return to Egypt. It is highly likely given the nature of Roman women that Servila would be enraged to be so publically supplanted without even the title of wife to assuage her humiliation. It is one thing to be a wife that is enduring a mistress, people think well of you and frown on the philandering husband. However, to be a mistress, replaced by yet another mistress and a queen no less is pushing it. Add to this Servila was an older woman, the queen young (if not beautiful) and you have a recipe for betrayal and murder

Just a little ancient smut and innuendo to get your day started. A spurned woman brought down the most powerful man in the world without lifting a finger herself.  Servila set the price for her heartbreak high, nothing short of his death would settle the bill…that’s what really happened if you ask me; and the history doesn’t dispute the possibility that’s indeed what occurred that March morning over 2000 years ago.Rome Cat Sanctuary under Threat

The Men of the 10th Legion
Scroll to top