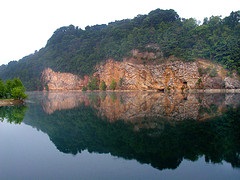 Ella was twenty-seven when it happened. She had long been fascinated by the deep end of the lake – the very middle to be exact – since she was a child. The lake was just an old stone quarry, long abandoned by the town that grew up around it. The lake was her favorite place.  She never shared it with anyone. Not another soul came with her to these quiet, man-made waters that spooned as lovers would, around an evergreen forest and jagged pink marble walls.

The trees at the shoreline dipped lazily into the water like the fancy lady Ella could never be. The kind of woman who enjoyed sticking her pinky out while she sipped daintily from a teacup and whose biggest claim to fame was marrying well.  Ella never felt lonely in all the years she visited the lake. Eventually, she knew the mysteries hidden in its depths would entice another to sit on the grassy slopes.  Acknowledging the ambition in her foresight, she waited in patience, but for whom she did not know.  Until she did.  She spotted him from the shore, a stranger in the middle of the deep end of the lake.  She watched as he rowed closer and closer to the hypnotic deception that lurked at the heart of the lake.

He had appeared from nowhere.  At the edge of her peripheral in the zone where she couldn’t be sure she saw anything at all, he appeared for a fleeting moment. It startled her, then afterward she realized it thrilled her too. She had been lounging when he unexpectedly joggled her from a reverie of mischievous imaginings that pleased her even if they wasted time.

When Ella came to her senses, she looked around for the source of the disturbance in her soul.  There in the growing darkness of late afternoon, she found him.  He was rushing toward the waterfront dragging a small, unstable canoe behind him.  He paused to glance back to where she lay in the thick grass near the shoreline.  Her breathing sharpened.  His face was pleasant enough; handsome she suspected if the light were brighter.  She stared hard at him, wondering what he saw and if it pleased him.  She had been dismissive this morning standing naked before her dressing mirror, but now she wished she’d chosen a different swimsuit to wear to the lake.  But she had not expected to meet anyone.

Without speaking a word to her, he smiled.  It was the first time in her life that she could recall seeing one.  It spread across his face in a way that spread heat across her body.  She rose to her feet more curious about this stranger than anyone she ever met before.  When he did speak, she knew it would not matter what he said to her.

He slid the canoe into the still waters.  The last of the setting sun reflected in the lake and into Ella’s upturned face.  She lost sight of him in the confusion of light and motion. She moved closer to the water to find him.  When her eyes located him, he was reclining in his canoe with his arms crossed at leisure.  He waited for her.  She didn’t need for him to say it or even move. It was something Ella felt in her spirit and with the revelation, something within her that was dead sprung forth into grateful life.

She moved without hesitation into the waters.  They were colder than she expected, but she gave it no thought.  Even her body’s unhappy reaction to the chill of the waters did nothing to dissuade her.  Reason explained it patiently; fear shouted, and finally shame added its mean-spirited little whisper to the mix.  The stranger had no name, no plan and no words that could turn this decision into wisdom.  ‘It’s foolish; he will only see your desperation.  Even if you reach him, the effort is wasted.’ the insidious and oh so familiar voice of doubt whispered.

Lies.  Ella stopped listening.  She would allow no vainglorious notions of inferiority to keep her earthbound – not now that she understood flight.  The stranger’s appearance on the lake compelled a new reality, one she could claim without prerequisite.  As she moved further into the shifting black waters, she stopped feeling the icy cold as pain.  Instead, it felt like necessary resistance, something she could push against to speed her through the waves.  Around her, the twilight increased.  The night creatures began to emerge; their splashes were ominous and worse unseen.  Ella turned about her until she found the canoe demarcating a place between Earth and air, but it was empty.  It floated in the distance, its occupant somewhere in the waters with her.

No, beside her.  She felt rather than saw him.  She was not disturbed this time when she encountered that peculiar sensation of his presence near her.  She knew he would be there, that he would not leave her foundering her way to him in an unhappy darkness.  Together they turned towards the middle of the deep end of the lake. There was no point in looking behind them to the shore.  It was closer, but it was impossible to imagine ever going back there or that anything there could be as vivid-bright as what lay ahead.

Their heads met in the waters, their faces inches from each other, half covered.  No words were possible, and none where needed.  Everything in Ella’s world spun together in a dazzling burst of emotion that was as close to exaltation as the living are allowed.  She was exactly where she wanted to be, where she knew she had to be – alone in the doldrums of her beloved lake with an intimate stranger and a canoe to reach.

She felt his fingers encircle her wrist.  The pressure was comforting to her.  He pulled her alongside him, pushing her ahead of him out into the deeper waters.  Ella surged forward.  The stranger launched himself beside her, and soon they matched each other stroke for stroke, their minds set on a singular purpose – to reach the canoe in the middle of the deep end of the lake.  Ella imagined what it would be like when they got there.  She would let their hands intertwine on the chill, wet rim of the canoe. She imagined she could feel the hard bottom when they piled inside, and their unspeakable joy while it ferried them to the other side of the lake.  There the stones and the trees parted wide enough to peek at the rich lands beyond, lands overflowing with bounty enough to nourish them and all who followed for many years to come.

As Ella swam beside her stranger, the waters around them were no safer than they had been some minutes before then.  The same slithery creatures and scavengers that lurked in the depths still lurked there.  The dangers they posed were real.  Yet once in the water, gaining the canoe was not a choice, so Ella’s fears gave way to strength.  She swallowed their bittersweet draft along with a dose of the lake water, stale and unpleasant this far from the shore.  She spit it out.  Her stranger noticed her.  He flashed the smile that had pulled her into this delicious predicament in the first place.  In between strokes, he laughed and so she laughed with him.

In chorus, they reached the canoe, both completely spent from the journey.  Drained of energy, they helped each other struggle without grace into it, neither having the ability to do so alone.  Looking back at the shore, Ella admired how far they had come and how insane an idea this had been from the start.  Yet fortune never favors a timid heart.

From the shore, it was impossible to see the small path that led to the lands beyond the lake but from here the way was clear and the traveling easy.  Their canoe had everything they needed. Her stranger had planned well.  There were provisions enough for two; as though he had somehow known he would not make the trip alone.

There was no reason for them to rush their crossing now.  They took their time to enjoy the night and each other.  The heavens blazed forth with a million stars; the air was heavy with pungent natural smells that seduced and reminded them they were not alone.  All around them life – some of it dangerous all of it beautiful – thrived and would continue to do so long after they had crossed the lake and found what lay on the other side.

But right now they were here, in the middle of the deep end of the lake and finally, he spoke.

“I’m told it’s beautiful beyond these trees.”  Ella looked into his face, seeing for the first time that while his eyes were sightless, it was she who had been blind.

He nodded.  “Of course, He led me here and He promised it.”  Her stranger leaned back in his little canoe; his arms stretched wide enough for Ella to find her way into them.  She settled back into the heart of him and there they lay together under the stars, sure of their path and hopeful for the morning light to lead them beyond the middle of the deep end of the lake.

Want to join the discussion?
Feel free to contribute!

The Men of the 10th Legion