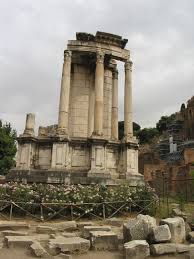 First – a quick history lesson to set the scene. Vesta was the Goddess of the hearth and home. By design she was also a virgin and her priestesses had to be virgins as well. The genius or spirit of the goddess was symbolized by the eternal fire kept in her temple. The fire of Vesta was sacred from the very first days of the Roman republic and even before then when the city was still ruled by a series of increasing despotic kings.

As part of their sacred duties the Vestals had to remain virgins. Any Vestal found to have broken her vow of chastity suffered a fate worse than death. It was forbidden to kill her directly so she would be shut up under the earth with a small supply of food and water and left to die.  This terrible punishment was carried out in a location near the Colline Gate called the Campus Sceleratus or “evil field”.

Vesta’s temple was located in the heart of the forum and her female priestesses lived just behind it in the house of the Vestals. A diminutive structure, the temple was a round building with the sacred fire located in the cella of the temple. This fire was so important to the Roman state that it was never to be allowed to die. The purity of its flames symbolized the genius of the entire Roman state and the roots of its power. 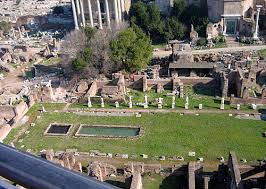 The attendants to the sacred fire were chosen from only the best families in the city and it was considered a great honor to serve as a Vestal. Vestal Virgins served for 30 year periods, after which time they were free to leave the service and resume life within the city including giving up their precious virginity to marry. Their service years were divided into three – they spent 10 years learning the rituals, 10 years completing them, and finally 10 years teaching the ropes to the new recruits.

In addition to belonging to an exclusive and highly honored college of priestesses, Vestal Virgins were also endowed with certain powers and honors.

-the order of the Vestals was entrusted with wills, deeds and other important documents.  Ex. Julius Caesar’s will was entrusted to their care

-any condemned prisoner or slave who touched or even saw a Vestal Virgin on the way to their execution was immediately pardoned.

-Unlike other women in Rome, they were free to own property, have a will and even vote

-They held seats of honor at any public event and were always treated with extra courtesy respect. They arrived and left any event in carpentum, which were fancy carriages and were guarded by official lictors or armed protectors.

Vestal Virgins were active in the city until the late 4th century, AD when Emperor Theodosius abolished their order as a remnant of Rome’s pagan past.

Sex in the City – Roman Style

Scandals In Rome
Scroll to top